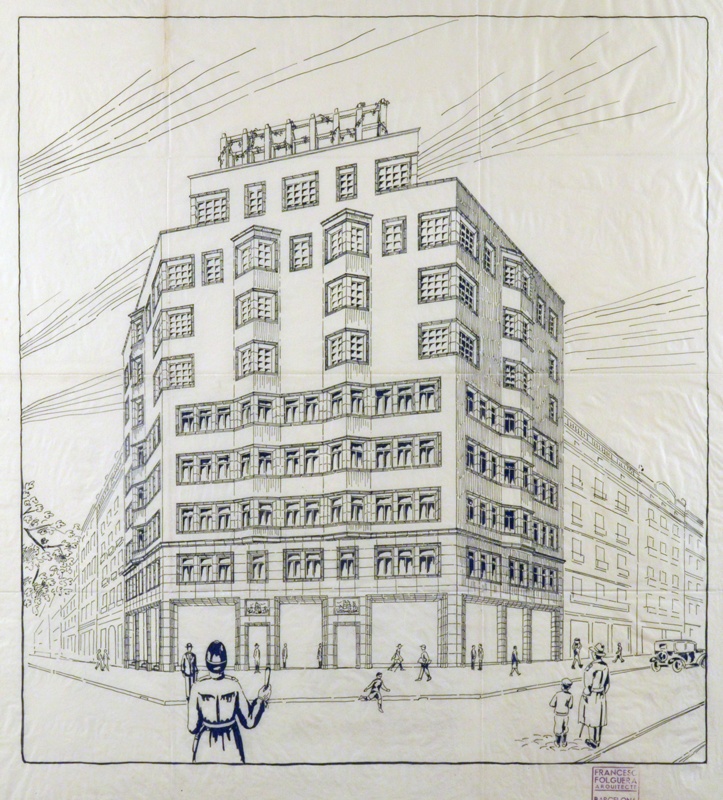 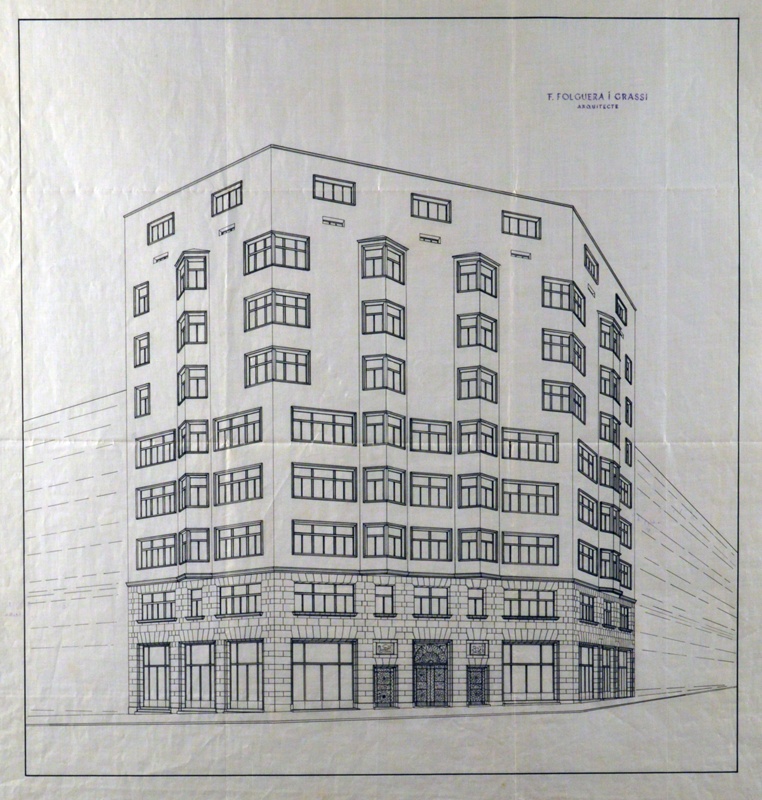 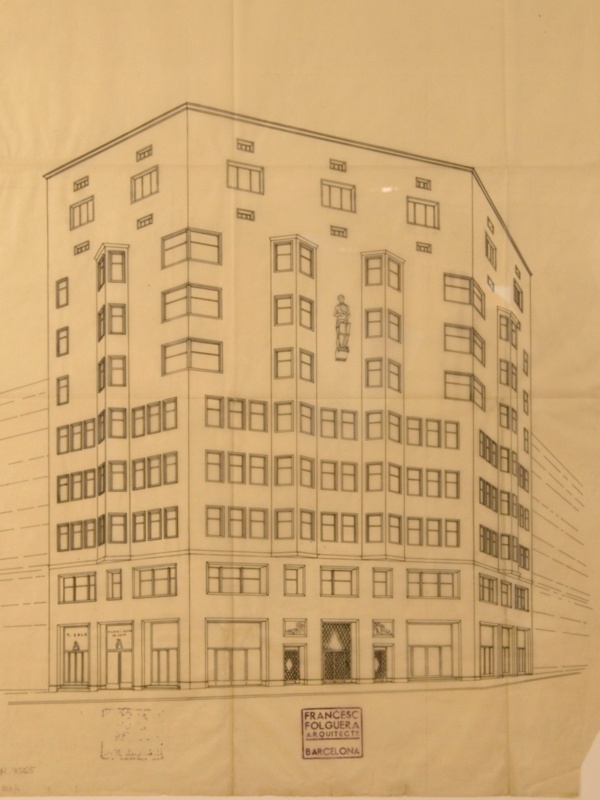 The building is a clear example of the influence of Central European purist architecture on the sensibilities of some Noucentista architects. The building is divided into three parts: the ground floor and the first four floors are for commercial use; the next two floors are rental housing, and the last two floors, in duplexes, are destined for the owner’s home, clearly facing the interior of the block of houses. This represents a transgression of the usual order of the Eixample’s houses, in which the main floor is reserved for the owner. The façade articulates the edges and vertical orders of the building by means of a single window module positioned in very different shapes, which differentiate the change of use from the fourth floor. The use of the metal structure and the excellent execution denote a desire to associate this architecture with a rigorous application of the construction procedures.

Casal Sant Jordi is located on a chamfer of Barcelona, facing north. One of the most important characteristics of the building is that it is much higher than the ones surrounding it, which makes it bear a certain resemblance to a skyscraper. The possibility of making a relatively tall building is a consequence of the new possibilities offered by mechanical elevators. This has made it possible to make the most innovative decision of the project, which consists of developing a mixed program of activities. From bottom to top, two floors of commercial premises, three floors of offices, three floors of rental housing and an attic for the owner, who manages the rental of the entire building, are superimposed. The façade reflects all these innovations and becomes the most expressive element of the project. It is conceived as a large canvas, completely smooth, which folds slightly and introduces a series of vertical lines, without ornaments, which sometimes become tribunes and other times in the turns of the chamfer. They are counterpoints that cross the different functional layers of the façade. The sculpture of Sant Jordi introduces a symmetry that otherwise would not exist.

Located in the Eixample district, the Casal de Sant Jordi is a partitioned building located on the northern corner of the block of houses bounded by Casp and Pau Claris streets and Ronda de Sant Pere and Passeig de Gràcia. It has a façade that embraces numbers 24 and 26 of Casp Street and number 81 of Pau Claris Street. The main access is from number 26 Casp Street. With a beveled quadrangular floor plan, the elevated structure of the building includes a ground floor, mezzanine, six floors, attic and roof. The attic, which was the home of the original owner's family, is arranged on two staggered levels and open to a rear terrace in which a glass-bottomed pond is located that serves, at the same time, as a skylight in the inner courtyard of the plot. The façade of the house structures its openings in horizontal axes of regular rhythm. In fact, it is the most expressive element of the project. The plan of the façade is conceived as a large and completely smooth canvas that folds slightly and has a series of vertical lines, without ornamentation. There are different types of windows that express the different functions of each of the floors. The office part embraces the base of the building (finished with stone cladding on the ground floor and mezzanine) and the first three floors, which open to the outside through three levels of rectangular windows; the part destined to houses counts on the three following floors, that are pronounced to the outside by means of less numerous windows; the part intended for the owner's home (the attic) is made evident through seven Chicago-type or landscaped windows. Some of these windows provide a greater amount of light as they are included in the four angular grandstands that rhythm the façade and provide it with new angles to give access to the light. The walls of the façade are covered with a plaster of green mortar that contrasts with the light-coloured artificial stone that frames each of the windows. The main access consists of a large portal flanked by two smaller portals crowned by two relief gates sculpted by Joan Rebull. These enclosures are made of bronze and glass and include, in their rhomboid-based grille, allegorical motifs related to agriculture and trade. On the right-side door, the grate houses a cast relief with the caduceus of Hermes, depicted in the petri relief of the overhang as a young boy with a winged helmet. On the left side door, the grate houses a cast-iron relief with ears of wheat and a flaming torch, attributes of the goddess Demeter, depicted in the petri relief of the overhang as a young girl with a bouquet in her hand. Above these doors are the original numbering signs of the building, backlit bronze and glass signs. The central portal shows an allegory of modern leisure, with a woman reading a book and a man sitting on a balustrade, surrounded by prickly pears. The iconographic program of the façade closes with a sculpture by Joan Rebull depicting Saint George semi-nude, standing and holding his shield on a corbel. The main lobby is the space that has best preserved the original elements of the building, both in terms of its structure and in terms of the movable elements that make it up. In this sense, the bronze and frosted glass doors that segment the area and, above all, the railing of the main staircase, with markedly Art Deco lines, should be highlighted. This building was built by the architect Francesc Folguerola i Grassi between 1929 and 1931. It is the first building in Barcelona inspired by rationalist currents from Central Europe (along with the Josep Masana House on Lleida Street), attentive to the avant-garde innovations through a decorative device tending to Art Deco. However, the sculptural decoration on the façade is presented as a concession to the last Catalan Noucentisme.