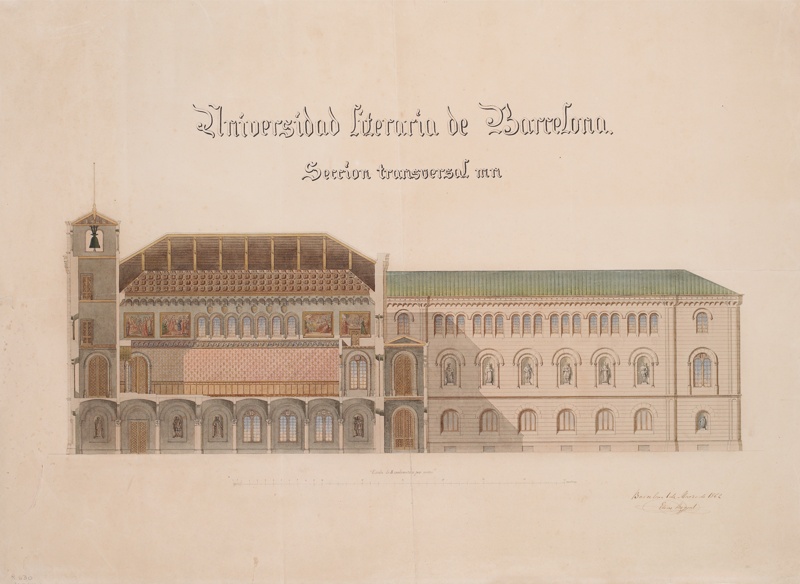 The University of Barcelona is one of the first buildings to be arranged in the plot designed by Cerdà. Its genesis, however, is older, because Rogent designed several projects for the University in different locations inside the old town that had to return from Cervera to Barcelona after Philip V took it from the city in retaliation for the events of 1714. The final configuration leaves a 130-metre façade on the Gran Via, asymmetrical with respect to Universitat Square, in the middle of two blocks of the Eixample (with a 220-metre front) that it does not fill. The building follows the tradition of the great European universities: two courtyards, one for Science and the one for Humanities, which are completely symmetrical and are separated by a central body with a very powerful marble staircase leading to a beautiful auditorium located above the lobby. The urbanisation of the area, which makes the building adapt to the Cerdà plot, was carried out in the 1930s by architects linked to the GATCPAC. On the short sides, facing Aribau and Balmes streets, there are a series of buildings that prevent the full view of the side façades. The building is built in neo-Romanesque style, with a sober, powerful, severe stone façade, built with beautifully preserved ashlars. The interior spaces are of great beauty and the cloisters still retain their original life and still house several schools linked to the current University of Barcelona. Visiting the building means seeing it through the eyes of today's students who, thanks to its flexibility, can continue to use it with the same freshness of the first day. The sequence of spaces formed by the access lobby, made of worked and exposed stone, and some interesting enough vaults that support the Auditorium and the staircase to access it, is particularly recommended. A visit to either of the two cloisters is also recommended.