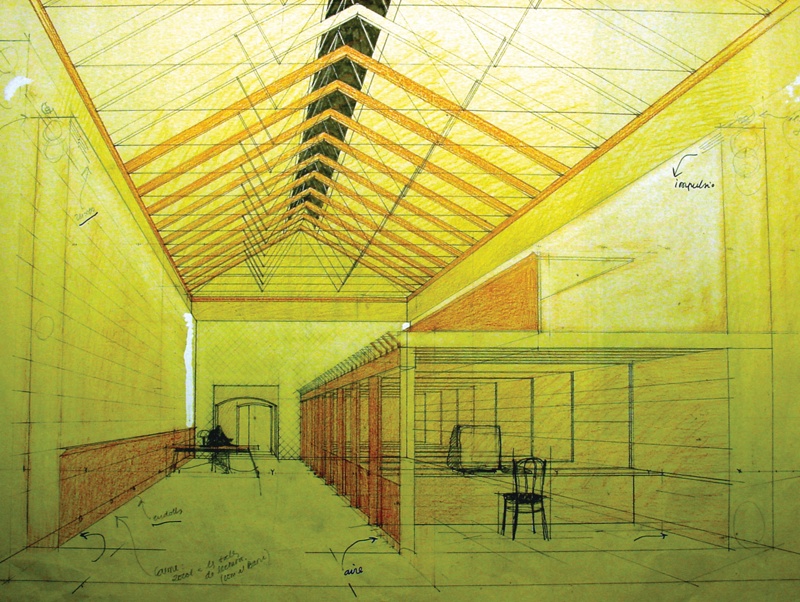 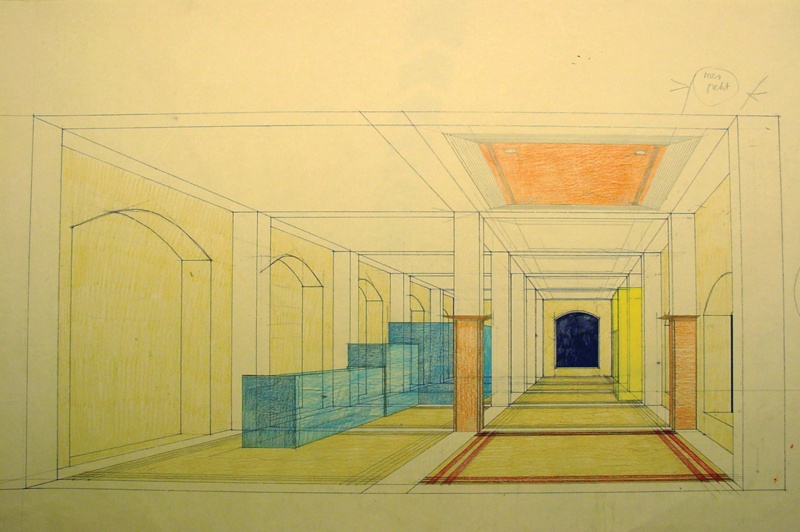 Restoration and Rehabilitation of the Convent dels Àngels for the FAD

The Raval district was located between the second walls of La Rambla (1260) and the third and last walls of Les Rondes (1336-1387). The establishments, services and activities that were disrupting the fields, the farmhouse and the guild house coexisted there. Frustrated expectations of growth in the end of the Middle Ages left a large amount of available land that led to the installation of numerous religious buildings as a result of the rise of Catholicism that were typical at the time. The culmination of this long process that turned the Raval into a convent district can be traced between the 15th century and the confiscating action of Mendizábal in 1837. Its enumeration would be too extensive.

On the area in which the study focused, few were the transformations that took place during the Enlightenment absolutism and the industrial revolution except for the opening of Joaquim Costa Street and the interesting urbanisation on the old lands of the Convent of the Carmelites built in 1875.

The centre of attention of the city moved to the Eixample Cerdà and this area of the Raval district was left as a forgotten centre, with a significant presence of large buildings, many of them disused and located in a typically medieval plot that made its pedestrian and wheeled access hard. A world full of possibilities in the heart of the city and ignored by most citizens.
The first Democratic City Council became interested in the neighbourhood and in July 1980 commissioned a study on the possibilities that the Convent of the Angels, the Old Chartiy House and the Old Mercy House, could offer to accommodate new uses that would give them a renewed meaning and act as locomotives for the revitalisation of this whole part of the city. The work also had to propose an arrangement of the free spaces and a proposal of accessibility that the new uses were supposed to demand.

The ambiguity of the assignment was beneficial for the development of the work because the objectives of the project and the area of the study itself were specificised and evolved little by little according to its own internal logic.

Gradual knowledge of pre-established factors (the patrimonial status of the City Council and the Provincial Council, the rigid and then unbreakable criteria of the General Metropolitan Plan, the list of buildings listed for their historical and artistic interest, the awareness of the origins, the growth and historical importance of the Raval, the evolution of their uses...) were first superimposed on the reforms and extensions of important buildings, their possible new destinations, the new urban emptiness that were to give them a framework, the strengthening and new creation of routes of pedestrians, wheeled accessibility, new car parks... and how to represent all that. In this way, an elongated study area was set up, which, centered on the three large groups mentioned, extended parallel to Les Ramblas, from the Liceu to the Seminary.

From the very beginning the project looked at the neighbourhood from afar and understood it as a bas-relief in which a sculptor with a delicate tool would have been making subtle incisions in a compact and uniform mass. These hollows were very varied and had elongated, straight, curved, rectangular, square, regular, irregular, changed in width and length and all of them constituted an extraordinary set.

The project was based on the conviction that the protagonist and the indisputable value of the Raval was the richness and variety of these extractions, much more complex and richer than those of the Eixample or those that do not exist in the peripheral suburbs. The boulevards, streets, squares, enclosed gardens, passages and galleries were related to each other, forming a very varied and complex fabric that the project wanted to understand, respect, consolidate and continue.

And this richness and variety of public space reached a very high level of exceptional work of art thanks to the essential collaboration of a wise and discreet architecture whose main objective was to define and qualify the gaps it had around, forming with the city an indissoluble whole.

The project began with a drawing on a large 1 x 4 m tracing paper in which the chosen area was represented and with special attention all the ground floors of the important buildings. The necessarily slow realisation of the drawing facilitated the gradual discovery of the ways used by the architects of the Liceu, the Virreina, the Romea Theatre... among many others, to manipulate the established academic models and transform them into organisms more complex to the direct service of the urban environment in which they were located. Quite the opposite of what the Tuberculosis Institute (1936) and later the MACBA (1995) represented, conceived as isolated buildings outside the city and incapable of generating a controlled and dignified public space around it. What they actually did was damage it and make countless nooks and crannies, fences, bars, eternal partitions, and shameless visions of block interiors open to streets and squares appear for the first time in the neighbourhood.

The most radical and risky action of the project was the proposal to create a large square 130 m long and 52 m wide that highlighted and related the four main protagonists of the district: the old Convent of the Angels, the Old Charity House, the Old Mercy House and the magnificent Carmel urbanisation. It was imagined as an explosion of space and light which was accessed through narrow alleys, bathed by its characteristic zenithal light. A hollow without trees, with a hard pavement and containing inside the testimony of two isolated historic buildings: the Church of the Angels with its adjoining chapel and the beautiful Gothic building of the Old Orphanage.

The first demolition work began and, according to plans, the south corner of the main square was built. Parts of the old convent were recovered and consolidated, and several heterogeneous pieces were juxtaposed, visually covering partitions, rear façades, neighbours' courtyards, avoiding corners and opening new accesses and new pedestrian paths.
The most important piece of the set could not be bigger than it ended up being, in fact a very shallow screen that had to accommodate uses that were always imprecise and changing. The project tried to disguise all these circumstances and not forget that its fundamental mission was to help to tighten the large public space in front of it and at the same time give a first reference on the monumental character that was to be given to the future square.

Some changes in the Metropolitan General Plan and a gradual concretion in the contents of the buildings allowed in 1987 to advance in the definition of demolition, extensions of buildings and formalisation of the urban spaces around the Old Charity House. The changes were basically two.

On the one hand, due to its excessive rigidity, the idea of enlarging the building was abandoned on the basis of continuing its structure of courtyards embraced by equal and narrow crevices, and it was proposed to preserve only the beautiful Patio of Women and give more freedom to future constructions.

Thus appeared a new series of squares of different sizes and types embraced by large buildings and always connected to each other by narrow streets. The new constructions were imagined permeable to pedestrians on the ground floor, following the examples of the Santa Creu Hospital or the Old Charity House itself, magnificent examples of how large volumes do not break the small scale of the neighbourhood and were able to allow alternative routes and offer quiet spaces of great comfort and friendliness inside.

Many of these proposals were not followed.