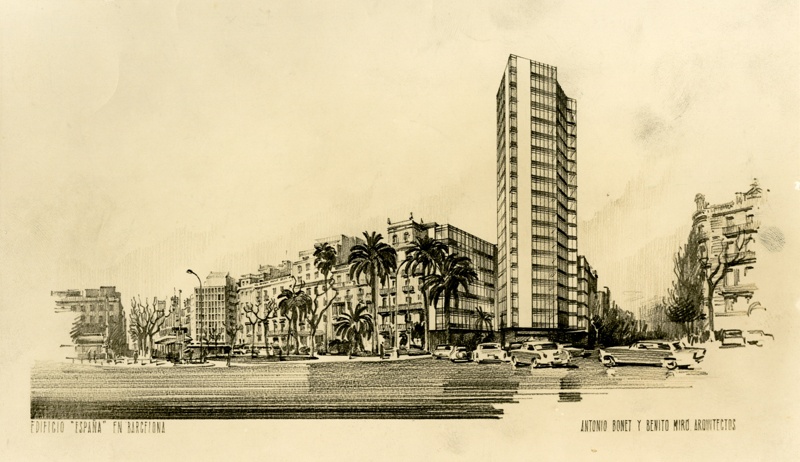 The Urquinaona Tower is an example of the occupation of a corner of the Eixample with a speculative program of offices resolved decisively concentrating buildability on the corner and removing it from other buildings on the block based on configuring the rest of the plot as a six-story plinth-building that insulates the tower. The plinth aligns a passage with the neighbouring buildings, both on Urquinaona Square and on Roger de Llúria Street, to later retreat to the interior of the plot and leave the volume of the tower clean from the ground.

The tower itself is a volume of considerable slenderness and height characterised by a section that varies every few floors to stagger the volume and break the monotony of some façades that Bonet wanted to vary in height. It starts directly from the ground and exposes very strong metal pillars.

The base of the tower and the plinth is a curtain wall of aluminum and bronze glass, very dark, on which solid grandstands are superimposed in the street plan, and they open laterally, with a coating of dark gray stoneware which led to the building being renamed “the skyscraper of society’s colour” in its day, and which, together with the dark tinting of the glass, gives the tower a surprisingly discreet character despite its volume. The grandstands provide it with a fluted look that helps to further accentuate the height.

Also noteworthy are the crowning of the plinth, with unique metal grilles that help to blur the boundary while hiding the machinery of the building.