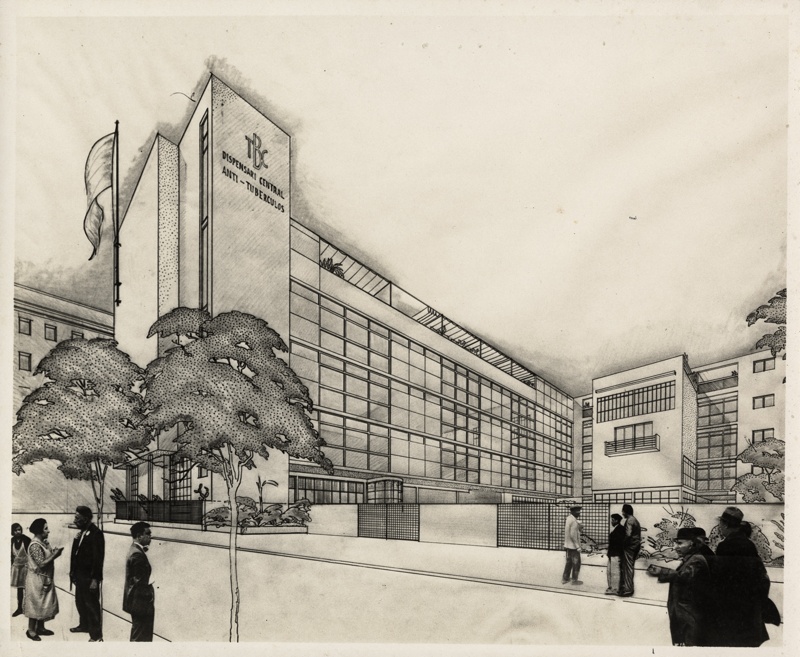 The building, intended to cover a sanitary need that was very common at the time, does not meet the street alignments but is organised into two parallel bodies oriented from east to west and articulated in an L shape. You enter the enclosure through a semi-public garden that gives direct access to both bodies. The block on the north side contains the surgeries, laboratories and archives. The body at the bottom of the site houses the conference room and the library on the upper floors. The layout of all the rooms, the circulation system and the treatment of the façades respond to a rigorous monitoring of the program and the solar abacus, regardless of the constraints of the location. It is a model of inserting the concepts of rationalism into a fabric that is not taken into account, and which is implicitly criticised for the strict functionality of the building itself.

Together with the Bloc House, the Tuberculosis Clinic represents an urban and architectural manifesto of the GATCPAC that lays the foundations of the Macià Plan, a plan that arises from the direct application of the Ville Radieuse in Barcelona and that was developed jointly by the GATCPAC and Le Corbusier. Had it not been for the Civil War, the sum of values that encompass the traditional city, the Cerdà Plan and the Macià Plan would have turned Barcelona into a laboratory of urban excellence and architectural quality, endorsed by the City Council and the Republican Generalitat. The harsh health and social conditions in Barcelona derived from industrial development since the beginning of the 19th century were the cause of the progressive increase in tuberculosis cases. In 1934, the Department of Health and Social Welfare of the Republican Generalitat commissioned J. Ll. Sert, J. B. Subirana and J. Torres Clavé, founders of GATCPAC, the project of a tuberculosis clinic within their policy of hospital socialisation and fight against tuberculosis. This clinic is located in the Raval, a district that the Macià Plan intended to sanitise by filling the most degraded and densified interiors of the block due to industrialisation, since it had begun within the walls. The building is designed in an L shape, completing the traditional street and opening up to the interior of the block. The interior garden serves as an access and responds to the hygienist demands of modernity, reconciling the compact morphology of the traditional city with the naturalistic demand of the garden cities. The structure is metallic and clearly differs from the enclosures, which are resolved with new light materials: iron carpentry, block walls, asbestos-cement rainwater, etc. Finished during the Civil War, it is one of the most representative works of the Catalan rationalist movement, a paradigm of the Ville Radieuse and of the architectural principles debated internationally at the CIAM.

Located in the most degraded part of Barcelona in the 1930s, the Tuberculosis Clinic was a project that revealed all the virtues of modernity that GATPAC had been trying to spread in previous years against the infected city inherited from the past centuries, specifically from the old town within the walls. The Generalitat de Catalunya used this irregular site in 1933 as part of its fight against the disease, and the architects’ volumetric response was the placement of two parallel but only partially facing linear blocks, joined by a corridor in an L shape, together with a small pavilion dedicated to the goal and supported on stilts. The plants of the general body are repeated unchanged four times. At the functional level, the strict dispensary program was divided between the ground floor and the first. The ground floor contained the reception and at the same time the waiting and admission rooms for the patients, while on the first floor the nursing room and the surgeries were located. The second floor was intended for the study of the disease, with an archive, library and conference room, while the third floor was reserved for the headquarters of the Tuberculosis Fight of Catalonia. Due to the restrictions on the site and the unhealthy nature prevailing in the neighbourhood, the roof was used for the highly recommended heliotherapeutic treatments to alleviate the disease. However, the structure was solved with metal porticos that freed the interiors and façades from the limitations posed by the load-bearing walls for such a changing program. The materials used, such as glass and uralite in the coatings, helped to support an architectural language based on rationality, achievement, ventilation, programmatic functionality and the adaptation of the different scales of the building to those of the constructions that surrounded it. It was the way to transmit to an entire district the almost messianic bonanzas that the dogma of an incipient modernity in the country had engraved without apparent cracks. The building, however, was inaugurated in 1937, during the Spanish Civil War.

The clinic summarises all the ideological postulates and hopes that its authors had hitherto formulated theoretically and developed in isolation. The controversial use of new materials is combined with respect for the construction tradition. It is an innovative and modern work of official hospital architecture that already set some parameters used in hospitals later. Within the framework of the GATCPAC (Group of Catalan Artists and Technicians for the Progress of Contemporary Architecture), created in 1930 as the group of the east sector of the GATEPAC (Group of Spanish Artists and Technicians for the Progress of Contemporary Architecture) and commissioned by the Department of Health and Social Welfare of the Generalitat Republicana, in 1934 the Central Antituberculosis Dispensary, designed by Sert, Torres Clavé and Subirana, was designed in an attempt to socialise the hospital. This dispensary was part of a campaign against tuberculosis and had full respect for rationalist postulates. The structure of the building responded to a new conception of hospital medicine and a more modern distribution of spaces.